Your Next Stamp Challenge #43

Yay! I have another Your Next Stamp Challenge today! This time our hostess is Kerri and she created a really fun sketch for us: 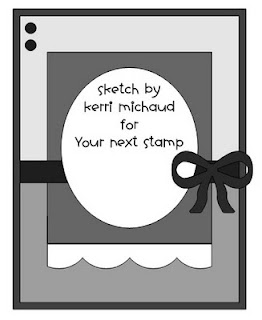 Here's my take on it: 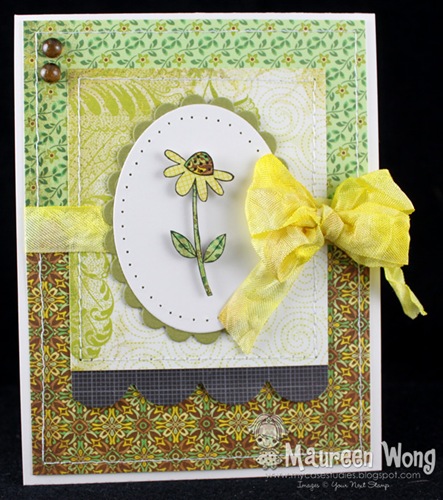 If you saw my May Blog Hop post, you know that I was playing with the idea of only using part of an image on my card. I kept playing with the idea for this card because it worked with the sketch! I used just the pretty flower from the Flower Pot Fairies set. I paper pieced it with 3 different patterns, and layered them all onto a base image cut out of cardstock for a little stability since it's popped up on foam boosters.

You see the little 'bellies on the top left corner? Those are the new Chocolate Glittered Skittles that YNS is carrying! They already have glitter in them for some extra pizazz! I used the smaller 3mm size on my card.

We hope you'll play along with us! One lucky participant will be drawn at random to win this adorable stamp, Fairy Fhiona: 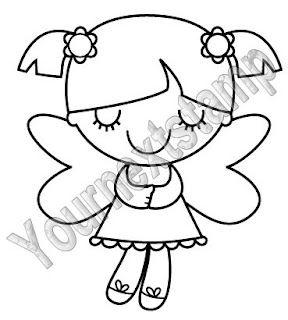 You don't have to use YNS images on your card, but if you do you'll get a double entry in the draw!

Also, the challenge hostess will choose her favorite card, and that winner will get the YNS Challenge "Top Pick" blinkie to proudly display on their blog PLUS $5 in YNS Stamp Bucks! You must use a YNS image to be eligible to be chosen for Top Pick.

Full details can be found at the YNS Challenge Blog. TFL!
Posted by Maureen at 9:00 PM 2 comments:

Hello everybody! Thanks for joining us for another fun and fabulous Your Next Stamp Blog Hop! YNS just released a whole slew of great new stamps so the DT (and our awesome guest designer!) have whipped up some eye candy using many of the new images.

If you came here by way of Jenny's blog, then you're on the right track! If not, please go back and start at Kerri's blog because you won't want to miss a stop! If you post a comment on every stop on the hop, you can enter your name into the nlinkz at the end to win a new release prize package! Plus, 2 of the stops will have prizes, but I can't tell you which blogs they are so comment on every one to increase your chances of winning one of these secret prizes!

*****And now on to the show!*****
For my projects today, I decided to play with the concept of not using the whole stamp. Yes, it's a really simple idea, but something I don't always think about when stamping. Sometimes I'll look at a stamp and think it's the wrong size for a sketch (because I'm all about using sketches!), when it could be perfect if I only use a portion of it!

My first example isn't incredibly creative, but I just love it anyway! 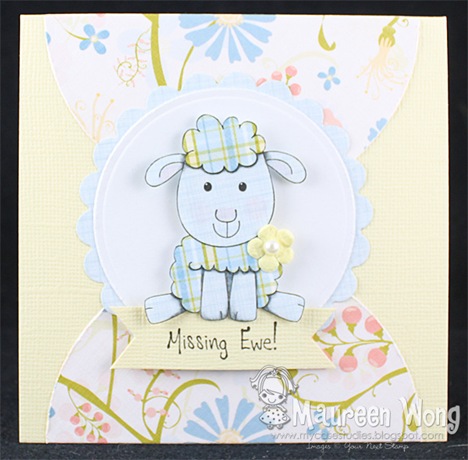 I used the You're Always On My Mind set (which includes this sentiment and a couple others) and a sketch from Card Patterns. I paper pieced the ewe using 2 different patterns and added a Prima flower with half pearl over the drawn flower in the image. I cut out just the ewe (leaving off the bird on her head and patch of grass she was sitting on) so that she'd really be the focal point of the card. She's popped up over the sentiment banner with foam boosters and I did a little coloring on the PP with colored pencils/odorless mineral spirits.

This next card was an attempt at thinking a little more creatively about using only part of an image: 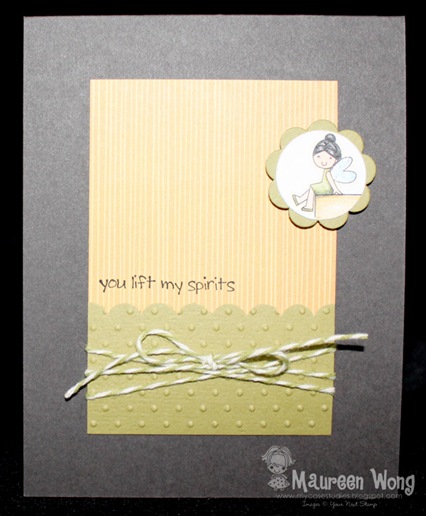 I really liked FTL #141, but had to make a card with the new Flower Pot Fairies set. So I got the idea to just use one of the fairies in the circular portion of the sketch! I masked off a bit of the flower with clear tape so it wouldn't get inked, then stamped just the portion with this fairy on white cardstock. She's mostly colored with colored pencils (no OMS this time), except I used Copics on her skin and a faint yellow outline that doesn't show up in the pics. Finally, I Stickled her wings. Here's a close shot so you can see how adorable she is: 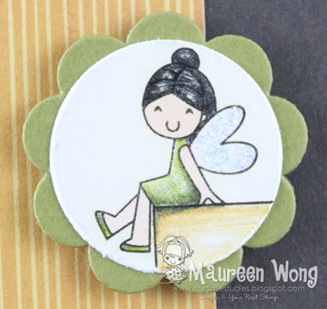 I hope you liked my projects and thanks for hopping along with us! Your next stop is the incredibly talented Peggy.
Posted by Maureen at 2:00 AM 27 comments:

Today is my day to post on the YNS Blog and here's what I came up with: 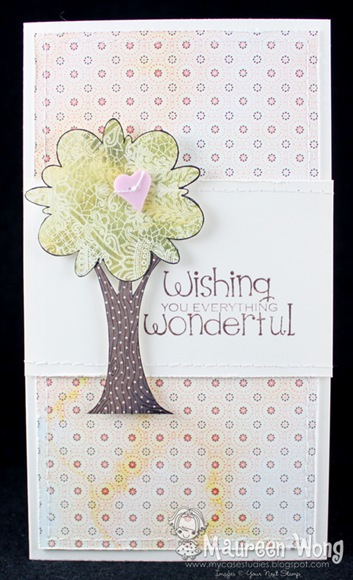 I used the new Wishing You Wonderful set and FTL #140 from Clean & Simple Stamping. I paper pieced the whole tree and added a little heart button tied with thread (inspired by the stamp Natasha used on her FTL sample). I did some simple straight stitching and added the sentiment from the set. The whole tree is popped up on foam boosters so it qualifies for YNS Challenge #42 - Pop It Up!

Your Next Stamp Challenge #42

Yay! I have another Your Next Stamp Challenge today! This time our hostess is Jenny and she wants us to "Pop It Up!" - use foam or pop dots to pop up your image. I do this with most of my creations so this was a great challenge for me! Here's what I came up with: 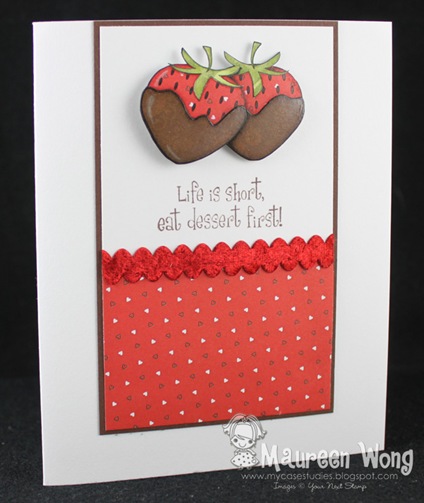 I paper pieced every part of the strawberries on patterned paper, and popped up some extra parts on the top strawberry for dimension. You can see that here:

I also did some shading and highlighting with colored pencils/odorless mineral spirits. As a final touch, I brushed some clear dimensional adhesive over the chocolate to make it just a little shiny.

We hope you'll play along with us! One lucky participant will be drawn at random to win this adorable stamp Fetch: 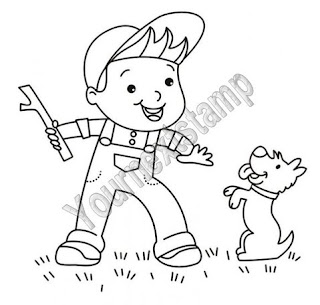 You don't have to use YNS images on your card, but if you do you'll get a double entry in the draw!

Also, the challenge hostess will choose her favorite card, and that winner will get the YNS Challenge "Top Pick" blinkie to proudly display on their blog PLUS $5 in YNS Stamp Bucks! You must use a YNS image to be eligible to be chosen for Top Pick.

Full details can be found at the YNS Challenge Blog.

But wait - there's more! Since I forgot to post this card on Saturday, you get 2 for the price of 1 today! :)

This month, YNS is sponsoring the Sketch For You To Try! 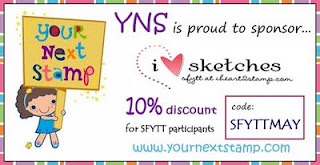 Jen gave us this fun sketch: 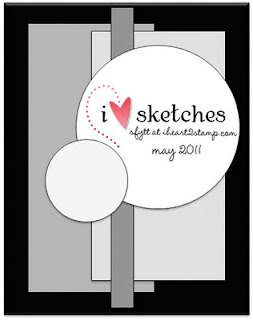 And here's my take on it: 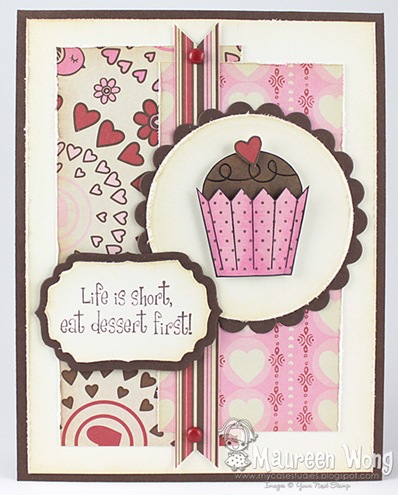 I used the same 2 sets as the card above and paper pieced most of the image as well (except the heart on top which was just cut from the patterned paper). I also popped up the whole cupcake on foam boosters, so it works for our current YNS challenge as well!

We hope you'll play along with us! TFL!
Posted by Maureen at 9:00 PM 4 comments:

You can also find me at:

Maureen
I'm a married mother of 2 sons and 2 furbabies who loves papercrafting and playing on the internet!